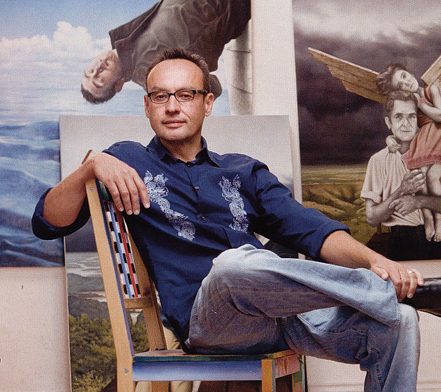 Born in 1959, Jorge Santos is of Portuguese descent. His childhood was spent in Luanda, Angola before his family fled to Lisbon, Portugal in order to escape a violent political agenda. As Portugal sunk into its own revolution, Santos relocated to the United States in 1982. Throughout these years the artist consistently honed his draftsmanship as a form of escape from life’s unrest. Particularly struck by an Odd Nerdrum show at Forum Gallery, NY in the 90s, Santos began to experiment with and use paint thereafter.

Jorge Santos paintings are a profound display of picture making for the sheer purposes of formulating an all but transparent narrative via highly technical draftsmanship and paint handling. As a self-taught artist, the evolutionary process of his work is often subject to reconfiguration, repositioning, and refinement until the grand conclusion is met. Narrative is of such importance that even compositional concerns may be subordinate to the inclusion of a necessary motif in the storyline.

One may recall the Latin term “deus ex machina”, which is a literary device used to resolve a troubled plot. In English, this translates to “God out of the machine”. It refers to an unexpected, artificial, or improbable character, device, or event introduced suddenly in a work of fiction to untangle a plot. For instance, consider the artist’s 2012 work entitled Maitre D where a fork between one of the dinner participant’s toes is tied by string to a wine bottle in the foreground thus preventing it from crashing to the floor. How or why did this happen? This whimsical instance is the result of a mid-production decision to reposition compositional elements in order to resolve the foreground in a more provocative way without having to repaint the bottle.

This almost humorous result often surfaces in a Santos work, as for the artist, there are little rules he truly feels the need to play by. Paintings for the artist exist as a cocktail of source materials, from still life to imagery or the mind’s eye. They are not pre-assembled sets such as that of the Realist painter, and any “photo realist” instances are purely the result of the artist’s skill to portray a likeness. In fact, the ambient lighting and elongated figures are more stylized than authentic, echoing the Italian Mannerist painters of the 16th century.

Though highly refined and emotive, a Santos painting may have a poetic title but this is not a necessity, it’s just by way of the artist’s improvisational nature. He seems to be commenting on pop culture, derives source material from TV, Internet videos, and other mass media but is humble and quite reluctant to be billed as a social critic. In his pictures, settings come off as irrational or precariously balanced, moods are secretive, illusory, and often ambiguous but there is no argument to their blatant allure and charm over the viewer. These complexities may seem to deliberately provoke interpretation but Santos will only entertain his personal opinion that he is simply an image-maker.